In 1964, Gloria Szymanski was recruited by her therapist, Everett Shostrom, to take part in a series of films demonstrating psychotherapy. Shostrom also recruited three leading psychotherapists: Carl Rogers, creator of ‘person-centred therapy’ (widely known as ‘counselling’), Fritz Perls, creator of ‘Gestalt therapy’ and Albert Ellis, creator of ‘Rational Emotive Behaviour Therapy’. Shostrom told Szymanski the videos would be used solely for education purposes. He lied. He later turned the videos into a motion picture, ‘Three Approaches to Psychotherapy’ which was shown in cinemas and on TV. You can still watch it on YouTube today. Szymanski took legal action, but it was unsuccessful.

Last week, I went to see “The Patient Gloria” at Traverse Theatre; a production based on the videos and Szymanski’s experiences. The play combined re-interpretations of the therapy scenes with narration, music and dancing. It took a highly sceptical view of the therapies, highlighting each therapist’s stereotyped interactions with Szymanski (“Rogers is paternal, Perls aggressive and Ellis is predatory”, an information sheet handed out before the play explained). Gina Moxley played all three therapists and also narrated the play, comparing her own experiences of harassment and negative treatment by men with Szymanski’s experiences at the hands of Shostrom and the therapists.

The play was, I think, intended to provoke thought about gender issues; about relationships between men and women and how the ill-treatment of women is often overlooked. As a Clinical Psychologist, my thoughts moved in a slightly different direction. Mainly I was struck by one thing: all three therapists in The Patient Gloria were men. They were therapists I was familiar with, though not the ones who created Cognitive Behaviour Therapy, the psychological approach I use. No: that therapy was created by another man, Aaron Tim Beck. In fact the more I reflected, the more I realised that male views have had a disproportionate impact on the field of psychology. I found this most troubling because psychology is a female-dominated discipline: 80% of undergraduates and around 80% of Clinical Psychologists are women. I began to wonder: is psychology sexist, and is the discipline disproportionately influenced by male views?

A quick look at the statistics concerning men and women in education and academic psychology would suggest this is the case. While around 80% of psychology undergraduates and Master’s students are women, this drops to 69% at PhD level. It drops further to 63% at Lecturer level and then to 33% at Professor level*. I also did an analysis of the male:female ratio of heads of psychology departments at Russell Group universities (for my advanced spreadsheet, see below). Similar with the ratio of Professors, this suggested that only 36% Of current UK psychology department heads are women. This pattern is a classic version of the “leaky pipeline”: women seem to get lost along the career progression trajectory, until only a minority remain in the most senior positions. 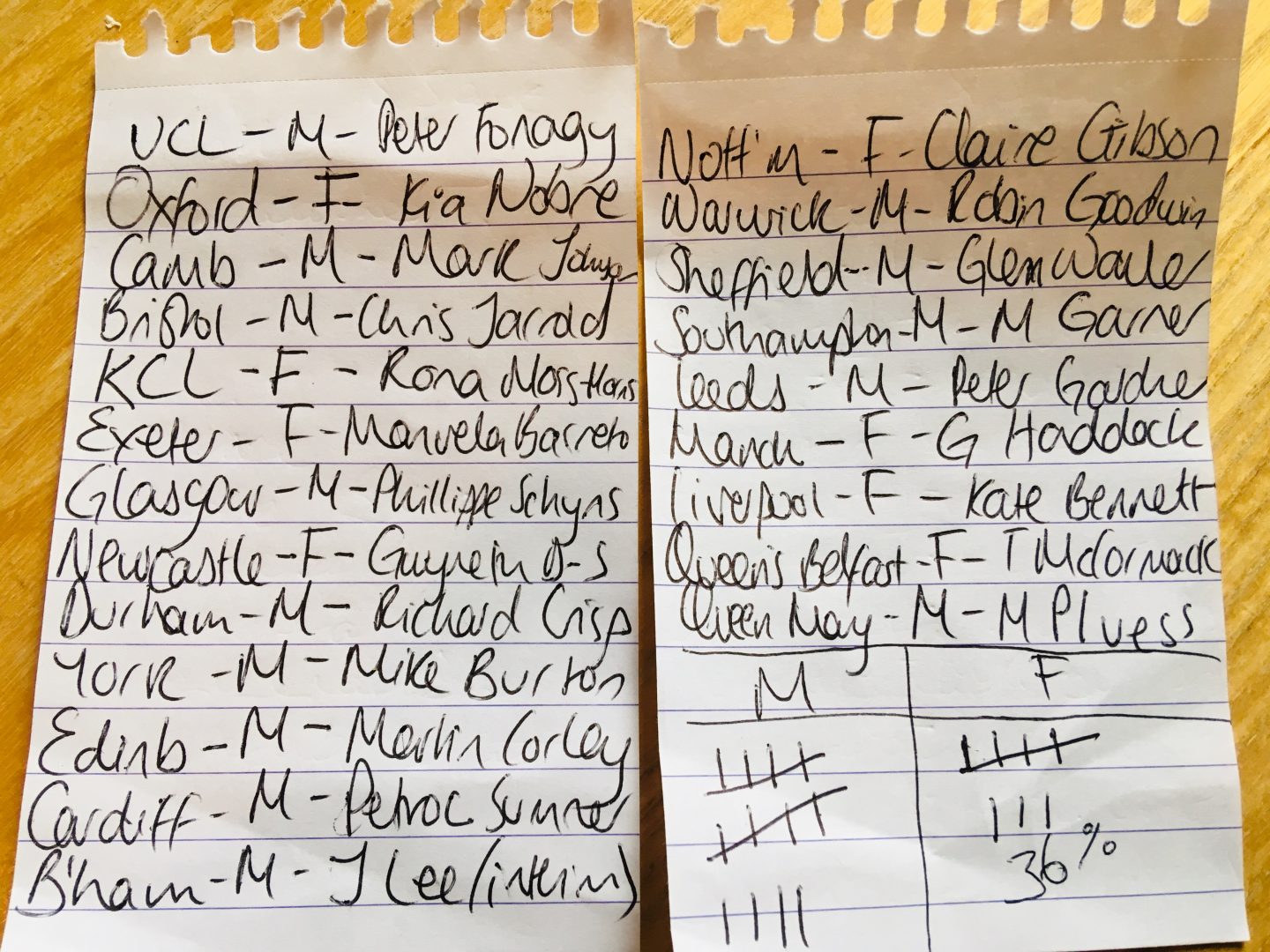 No bias in education and training

To be clear, there does not appear to be any bias at the point of enrolling students into educational courses. For example, with undergraduates, females tend to be slightly more successful than males at the application stage, and this has been attributed to females achieving higher grades overall. Similarly, for psychology graduates seeking to enrol onto a competitive Clinical Psychology Doctorate programme, the statistics show no evidence of an anti-female gender bias.

So, when and how do women get lost along the way? The Athena Swan Charter was created in 2005 to address issues of gender inequality in higher education, and academic schools now monitor and report their action on gender equality in order to gain awards (Bronze, Silver, Gold). Some of these reports are available online, and show that the issues are not straightforward. As the School of Psychology at the University of Birmingham reported in their Athena Swan Silver Application, they have tended to receive far more applications for professorial positions from men than women. In fact, over a 3-year period, they reported receiving 3 applications from women, compared with 29 from men.

Part of a wider academic problem?

One possibility is that the inequalities seen in psychology are part of a wider gender bias in academic outcome indicators. For example, an analysis of grants submitted to the Gates Foundation found that those led by women were 16% less likely to get funded than those led by men. Furthermore, where grants are awarded to women, they tend to be for smaller amounts of money. An analysis of funding awarded by the Engineering and Physical Sciences Research Council (EPSRC) found that on average, grants awarded to women were 40% smaller than those awarded to men. There is also some evidence to suggest that research papers written by women are less likely to be accepted by journals.

Part of a wider societal problem?

Another possibility is that the gender patterns present in psychology careers simply reflect patterns present in wider society. For example, an analysis of the Foreign and Commonwealth Office found that women were overly represented in junior grades; only 30% of employees in senior management were women. Furthermore, those women who were employed in senior management earned on average 6.5% less than men in the same category of job. Nationwide, the hourly wage gender pay gap for full-time employees has been estimated to stand at around 8.6%. About 40% of the pay gap between men and women is unexplained, indicating that it could be due to bias.

What has all of this got to do with Gloria Szymanski?

The three approaches to psychotherapy demonstrated in The Patient Gloria involved four prominent men: Carl Rogers; Fritz Perls, Albert Ellis and the instigator, Everett Shostrom. All men benefited in having their ideas broadcast worldwide, gaining international recognition for their work. Szymanski, the only woman in the equation, paid a high price for their gain. Her personal views and experiences were laid bare for public dissection. Furthermore, none of this was necessary. I have made several successful videos on YouTube which aim to demonstrate therapeutic techniques; these have been viewed over a million times and are now used by healthcare organisations and universities internationally. Crucially, none of these has sought to demonstrate therapy with a real patient. ALL of the demonstration videos have used actors. Contrary to the concept behind the Gloria videos: most people can’t tell. If you don’t believe me, just read the number of comments underneath where someone is asking if the clients are real. So the question I am left with is: if the gender balance of leading psychologists was more equal, would Szymanski have suffered in the way that she did? Furthermore: would the videos have been created and promoted, at all?

The Patient Gloria is showing at Traverse Theatre in Edinburgh until August 25th.

*I have taken these statistics from the Athena Swan Gold application submitted by the School of Psychology at Queen’s University Belfast. While the report said it took the figures from 2014-15 HESA data, I was unable to locate the original data online, and so have relied upon second-hand reporting of these.