As a clinical psychologist by background, starting out in patient safety research was a learning curve for me. Suddenly the outcomes being discussed weren’t mental health symptoms, they were avoidable patient deaths, medication errors and patient falls on wards. Another thing I began to hear about was the aviation industry. Practices from aviation had inspired early patient safety researchers and I came to understand that we had learned much from them. For example, they had introduced standardised reporting and embraced psychological approaches in order to understand the group behaviours that contribute to safety failures (Helmreich, 2000).

More recently, however, this idea has fallen from popularity. When Jeremy Hunt attended a hospital Q&A earlier this week, he used this analogy. @Dr_Sarah_H, an emergency doctor at the hospital, challenged him on it. She later tweeted the problems with this comparison, highlighting the relative complexity of healthcare to aviation, the lack of control staff often have over their workload and issues with understaffing in hospitals. Her string of tweets went viral (below). 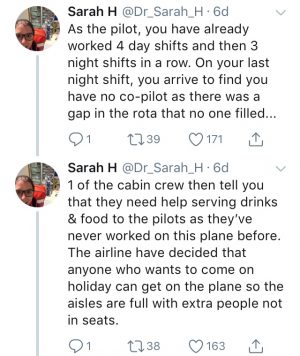 A couple of days after seeing these tweets, I was contacted by an experienced RAF professional keen to share with me the things he believes aviation do which healthcare can still learn from. He said that the RAF:

In summary, the aviation industry enables their staff to report in utter confidence and rewards staff for good reporting. I think it would be hard to deny that healthcare still has a long way to go to meet these standards. Perhaps the contention then, is not Jeremy Hunt’s point but his target audience: does he expect NHS emergency nurses and doctors to implement these changes? Unlikely. Telling staff working in underfunded services to achieve the safety levels seen in aviation will only engender frustration, the sense that they are not understood and that the impossible is being asked. As with the RAF, these changes will require leadership support, resource and buy-in from the highest levels.